EMERALD CREEK AMSTAFFS
Critical time periods in a puppy's life....
Early Neurological Stimulation Program
The U.S. Military in their canine program developed a method that still serves as a guide to what works. In an effort to improve the performance of dogs used for military purposes, a program called "Bio Sensor" was developed. Later, it became known to the public as the "Super Dog" Program. Based on years of research, the military learned that early neurological stimulation exercises could have important and lasting effects. Their studies confirmed that there are specific time periods early in life when neurological stimulation has optimum results. The first period involves a window of time that begins at the third day of life and lasts until the sixteenth day. It is believed that because this interval of time is a period of rapid neurological growth and development, and therefore is of great importance to the individual.
The "Bio Sensor" program was also concerned with early neurological stimulation in order to give the dog a superior advantage. Its development utilized six exercises which were designed to stimulate the neurological system. Each workout involved handling puppies once each day. The workouts required handling them one at a time while performing a series of five exercises. Listed in order of preference the handler starts with one pup and stimulates it using each of the five exercises. The handler completes the series from beginning to end before starting with the next pup. The handling of each pup once per day involves the following exercises:

​1. Tactical stimulation (between toes): Holding the pup in one hand, the handler gently stimulates (tickles) the pup between the toes on any one foot using a Q-tip. It is not necessary to see that the pup is feeling the tickle. Time of stimulation 3 - 5 seconds. 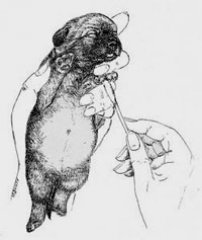 ​2. Head held erect: Using both hands, the pup is held perpendicular to the ground, (straight up), so that its head is directly above its tail. This is an upwards position. Time of stimulation 3 - 5 seconds. 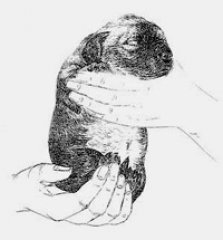 3. Head pointed down: Holding the pup firmly with both hands the head is reversed and is pointed downward so that it is pointing towards the ground. Time of stimulation 3 - 5 seconds. ​

​4.  Supine position: Hold the pup so that its back is resting in the palm of both hands with its muzzle facing the ceiling. The pup while on its back is allowed to sleep. Time of stimulation 3-5 seconds.

5. Thermal stimulation: Use a damp towel that has been cooled in a refrigerator for at least five minutes. Place the pup on the towel, feet down. Do not restrain it from moving. Time of stimulation 3-5 seconds. 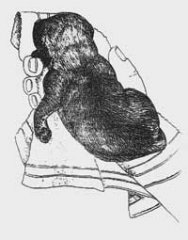 These five exercises will produce neurological stimulation that do not naturally occur during this early period of life. Experience shows that sometimes pups will resist these exercises, others will appear unconcerned. In either case a caution is offered to those who plan to use them. Do not repeat them more than once per day and do not extend the time beyond that recommended for each exercise. Over stimulation of the neurological system can have adverse and detrimental results. These exercises impact the neurological system by kicking it into action earlier than would be normally expected. The result being an increased capacity that later will help to make the difference in its performance. Those who play with their pups and routinely handle them should continue to do so because the neurological exercises are not substitutions for routine handling, play socialization or bonding.
Benefits of Stimulation -Five benefits have been observed in canines that were exposed to the Bio Sensor stimulation exercises. The benefits noted were:          In tests of learning, stimulated pups were found to be more active and were more exploratory than their non-stimulated litter mates over which they were dominant in competitive situations.  Secondary effects were also noted regarding test performance. In simple problem solving tests using detours in a maze, the non-stimulated pups became extremely aroused, wined a great deal, and made many errors. Their stimulated litter mates were less disturbed or upset by test conditions and when comparisons were made, the stimulated litter mates were more calm in the test environment, made fewer errors and gave only an occasional distress when stressed.

Rules of 7's
By the time a puppy is seven weeks old, he/she should have:

We also combine the above programs with the Von Falconer Program.  We follow this program on any puppy here until a year old (or until they go to their new home).  We hope that new puppy owners will be able to continue some of this training.

We also have read and recommend to all new owners, "Another Piece of the Puzzle: Puppy Development" by Pat Hastings and Erin Rouse.

Puppyhood is the most important and critical time of your dog's life. What socializing is done throughout puppy hood will forever affect your puppy's life and his or her temperament as an adult. Some good links for help with puppy socialization and training are: